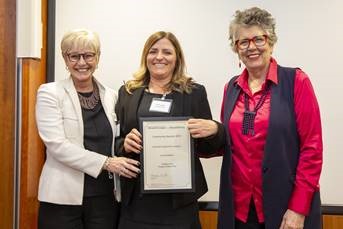 The Howard League awards are one of the most prestigious within the industry recognising exceptional work. The Howard League is the oldest penal reform charity in the UK. It was established in 1866 and continues to campaign for less crime, safer communities and fewer people in prison.

Gloucestershire YST youth justice and community team were nominated for their Children First project. The joint venture between Prospects part of Shaw Trust, Gloucestershire County Council, Police and Crime Commissioner and Gloucestershire Constabulary, focuses on a restorative intervention which sees young people kept out of the criminal justice system and make amends for their wrongdoing.

Since 2018 all decisions regarding youth cautions and criminal charges have been referred to a joint decision-making panel, able to resolve most cases through a youth restorative intervention.  The interventions include elements of restorative justice, where the young person may meet their victim, write a letter or undertake some work within the community to make amends for their behaviour. This is coupled with wider youth support provided to the young person. Only 4% of young people have not engaged with the programme and have been returned to the joint decision-making panel who then decide if they should face a return to the caution or criminal charge process.

Between January 2018 and April 2019 309 youth restorative interventions were given to 275 young people in Gloucestershire. In March 2019 Gloucestershire had the second biggest reduction of first time entrants into the criminal justice system, scoring 2/152. And reoffending rates have gone down significantly from 44% for a youth caution before Children First was introduced to 13.5% in the first year and 9% in the year to date.