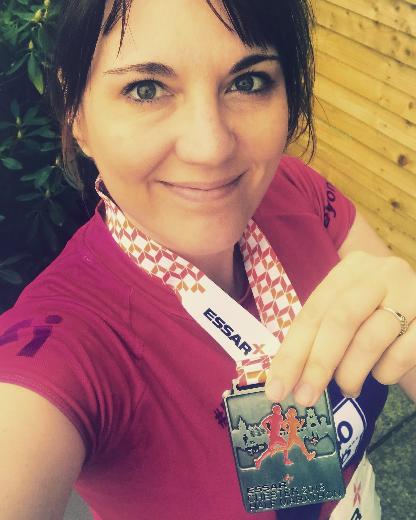 It’s National Stress Awareness Month and Marathon season (not sure right now whether the two totally complement each other, despite exercise being a proven stress buster!) and, on the 28th April, I will be running the London Marathon 2019 for Shaw Trust. The response I often get to this statement is, why? It may sound crazy but it’s something that I’ve always wanted to do. Every year I watch it on TV, inspired by the stories of the people that are running it, wishing I was there. And, every year I enter the ballot hoping I’ll be one of the lucky ones and get a place. So, this year when I saw the opportunity to run for Shaw Trust, I decided to go for it. I just needed a fool proof plan to get me marathon ready and on the start line in five months.

That plan has been stuck on my fridge door since the 24th December 2018 and it feels like it has totally taken over my life for the last 16 weeks. The training has felt like being on a roller coaster, full of ups and downs as it’s got tougher and the mileage has increased. I’ve been tired, hungry and hurt in places I didn’t know the body actually used when running. The fundraising has been just as tough. It started with a Christmas Fair on the coldest, wettest and windiest December afternoon (the kind that nobody wants to leave the comfort of their own home and left me thinking that this could be the most expensive race I’ve ever entered!) but ended with a quiz night where there almost weren’t enough chairs for the people that turned up. In between, I’ve dressed up as an Elf (in public), tried very hard to develop my creativity skills through a Modern Calligraphy Workshop and, along with somebody that really could sell snow to an Eskimo, got some amazing raffle prizes and sold lots of tickets. I’m now starting to get “Marannoyed” – I’m bored of myself talking about it and thinking about it (goodness knows how those around me feel!).

But, 230 training miles has certainly given me some thinking time. Some of which got me thinking about our young people and the goals, and expectations, that are written into their plans. I’ve experienced first-hand that life doesn’t always fit neatly into a plan and I’ve had to review and adapt mine several times due to illness, injury and everyday life – fairly mundane things compared to the adversity that some of our young people face on a daily basis. My three training runs each week have often felt like 3 mandatory appointments, and I’ve come up with all sorts of excuses to justify (to myself!) why I’m unable to do one. This probably comes down to fear – fear of the new distances, extended routes and possibly a fear of failing. Despite this, my training plan has also been a bit of a comfort blanket as if it wasn’t for a step by step 17-week plan, written in simple language that an amateur runner can understand, going from 6 miles to 20+ miles would have seemed an impossibility.

There’s now just two weeks to go until I get to the marathon start line and achieve my goal. This isn’t just down to me and my plan, it’s down to the encouragement of those around me, as well as the

kindness and generosity of the people that have donated their time, money and resources to my fundraising. I will forever be thankful to those that have supported me to achieve my London Marathon dream as well as supporting Shaw Education Trust to transform the lives of young people and families. I know that if I didn’t have a plan then my Marathon goal would remain a wish… having lived and breathed my plan for 17 weeks, I recognise the importance of plans for our young people as, without one, they may never know what they need to do to achieve what they too are capable of.